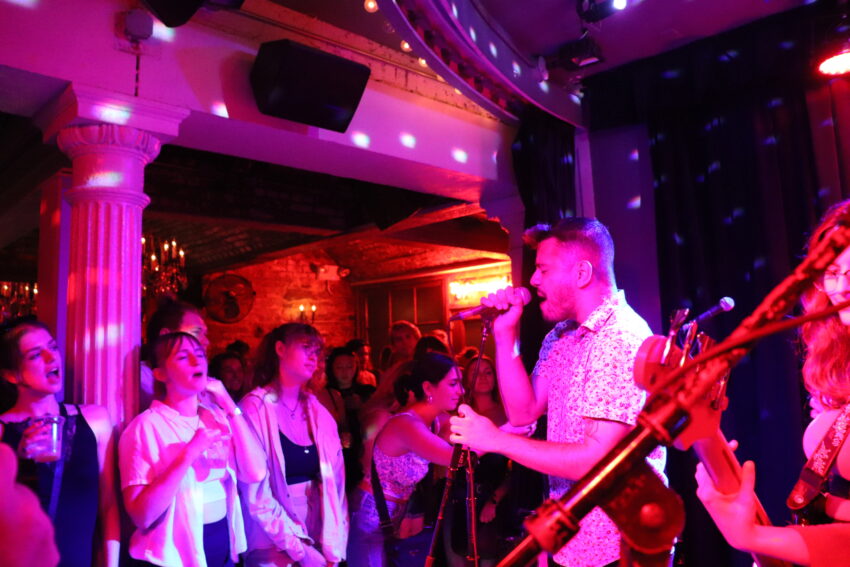 For so many emerging artists, performing live is the lifeline that provides them with exposure to new audiences. However, with the COVID pandemic rendering this an impossibility for the past 16 months, the opportunity to return to a routine so familiar yet foreign can be a major risk. However, when A Mighty Lamb Productions contacted Start The Week Over, Surfliner, Chrisy Mccullagh, and Casey Greenleaf to be one of their first NYC shows back from the pandemic, all three bands jumped at the offer with eager anticipation to return to the crowds they missed so much. I had the honor and privilege of covering their quadruple-bill show on July 28 at Berlin NYC, where each band’s performances made me recall the special magic that only emerging artists performing live can provide.

Kicking off the show was Casey Greenleaf, who self-described her music to me in her interview as a blend of emo, folk-punk and pop. The only artist to play without a backing band, Casey’s solo set very much lived up to what she advertised, providing anthemic sing-along choruses with a tinge of angsty irony in her vocal performance and lyricism. Citing artists like Pinegrove when recalling her inspirations, Casey’s takings from these artists was apparent, while using her own inspired storytelling to intersperse her music with tales of growing older, living in Vermont, and more topics. Casey even showed a more contemporary edge in her closing track “Life of the Party”, which she described as her “poppiest track ever”.

Second on the stage was Chrisy McCullagh, the Belfast-born artist promoting his newest record The Sun That Does Not Set with a full band. Combining classic 60’s soul with more modern touches of folk and rock, McCullagh’s dynamic vocal range won over many new fans who may have been waiting for one of the night’s final two acts. His set included the arguable highlight of the night, as his closing track saw a commanding, explosive vocal growl echo through the room, amplified by the psychedelic riffs to create an immensely powerful presence that captivated attendees. This moment served as a reminder to the power of live music, as the entire band’s performance elevated his studio recordings to a new level.

Despite not being the show’s headliners, Surfliner arguably drew the largest crowd of the night, and with that came the most actively engaged crowd too. The band’s combination of surf-rock, punk, and west coast music created a lively atmosphere as dedicated fans sang along with the band’s signature tight-knit hooks and bounced around to the energetic guitars and drumming. This introduced new listeners to a style not typically seen in the band’s sound, replacing the psychedelic elements with punk. The change in sound was a successful one, and demonstrated a sense of showmanship shared with some of the biggest names in punk today.

Headlining the show’s bill was Massachusetts-based band Start The Week Over. Playing their first post-pandemic show in NYC, the band was a perfect fit for the eager crowd, as their approachable combination of pop-punk and alternative rock appealed to the wide spectrum of attendees that night. Music publications have long been comparing this band to Mayday Parade, and it’s hard to see the parallels in this sound as their arena-ready rock anthems elicited an excited response from fans and attendees alike. However, as they stated to me in their interview, Start The Week Over refuses to be boxed into a single sound. Taking from a wide range of influences such as Dance Gavin Dance, The 1975, and Carly Rae Jepsen resulted in a flexible sound ready to be developed into a multitude of directions. This was demonstrated throughout their eight-song headlining set included slower ballad-like cuts and tracks more resembling pure pop. Regardless, they still effortlessly transitioned between the styles and lived up to the versatility they promised to me prior to getting on stage.

As I left the venue jotting down my notes on the show, one quote from Start The Week Over’s interview stuck out to me: “It’s awesome to go out and play songs you’ve never gotten to play before, and have the crowd sing along to every word of it”. To say this feeling was in spades during the show was an understatement: as many concertgoers’ first show post-covid, it felt like a surreal occasion to experience live music again. To hear the roar of the crowd, the thump of the bass guitar, and the crashes of the drum were all feelings that much like myself, these bands sorely missed throughout the pandemic. But with brighter days ahead, all four band’s performances shone on this special night in New York City, bringing back the magic of live music to all parties involved.